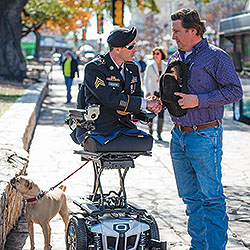 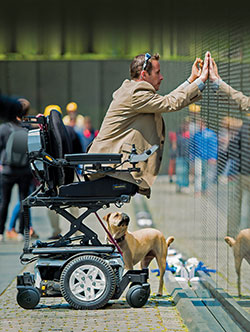 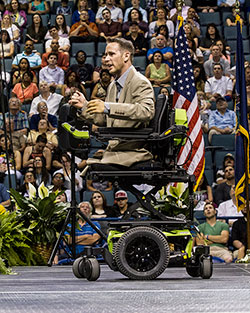 "Life is a pretty wild ride. The goal isn't to keep up, it is to rise above and get out in front of it. To do that you need to be fearless. That's my Edge."

Bryan Anderson resides in the Chicago area near his parents, Jim and Janet; identical twin brother, Bob; and teenage sister, Briana. In addition to academics, Bryan excelled at sports during his high school years and competed as an accomplished gymnast in state-level competitions. Following graduation, he worked for American Airlines™ as a ground crew chief at O'Hare International Airport.

Bryan enlisted in the U.S. Army in April 2001 and had a "ship out" date of Sept. 11, 2001. He served two tours of duty in Iraq and was stationed in the Baghdad area. He attained the rank of Sergeant in the military police, conducted police training courses in Iraq and gained additional law enforcement experience at Leavenworth Federal Penitentiary as a prison guard.

In October 2005, Bryan was injured by an Improvised Explosive Device (IED) that resulted in the loss of both of his legs and his left hand. As a result of his injuries, he was awarded a Purple Heart. Bryan received rehabilitation for a period of 13 months at Walter Reed Army Hospital. He is one of the few triple amputees to have survived his injuries in Iraq.

Bryan's story has received extensive media coverage, including a cover story in USA Today, two feature articles in Esquire magazine (including one cover shot in January 2007) and numerous articles in major newspapers and publications, from his hometown Chicago Sun Times to the Los Angeles Times and New York Times. He also appeared in a 60 Minutes segment profiling actor and humanitarian Gary Sinise.

Bryan has appeared in the HBO® Documentary Alive Day Memories: Home from Iraq and the CSI: NY episode "DOA for a DAY," as a murder suspect. He appeared in the Golden Globe Award-winning film The Wrestler, starring Mickey Rourke and Marisa Tomei, which was released in December 2008. Bryan was interviewed by MTV News' "Choose or Lose Street Team" and has appeared on the daytime drama All My Children. He was the subject of the Captain America comic Theater of War: To Soldier On, released in August 2009. Bryan's book, No Turning Back, was released Nov. 1, 2011, and he hosted a PBS show in the Chicago area, Reporting for Service with Bryan Anderson, which received an Emmy Award. He also received a Telly Award for his work on a Quantum Rehab® product video titled "Life Beyond Limits" and appeared in an episode of Hawaii 5-0 in 2014.

Bryan is a national spokesperson for Quantum Rehab, a Pride Mobility Products® company, and he travels the country making numerous personal appearances while delivering his message of perseverance and determination in major rehab facilities. In addition, he is an ambassador for the Gary Sinise Foundation™ and a spokesperson for USA Cares®, a national non-profit organization based in Radcliff, Ky., that assists post-9/11 veterans in times of need.

Bryan is an energetic and enthusiastic individual who enjoys challenging his limits. He snowboards, wakeboards, whitewater rafts and rock climbs. He loves to travel and enjoys meeting new people.

For additional background information, you may visit Bryan's website at andersonactive.com.