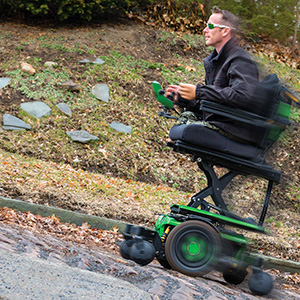 Bryan Anderson lives in Rolling Meadows, IL., near his family, including his parents, his twin brother and older sister. Bryan enlisted in the Army in April of 2001 and served two tours in Iraq. In October 2005, Bryan was injured by an Improvised Explosive Device (IED), resulting in the loss of his left hand and both legs. He spent 13 months at Walter Reed Army Hospital for rehabilitation. He is one of the few triple amputees that has survived his injuries in Iraq.

As the national spokesperson for Quantum Rehab, Bryan travels the country making appearances and speaking in major rehab facilities, delivering his message of perseverance and determination. Bryan serves as an ambassador for the Gary Sinise Foundation and is a spokesperson for USA Cares, a non-profit organization that assists post 9-11 veterans in times of need. Bryan also works with the Center for Courageous Kids and supports Smoky Mountain Service Dogs, Wounded Warriors of Texas, Children of the Blue Grass, and the Chris Kyle Foundation.

Despite his disability, nothing keeps Bryan from doing what he loves. With such a busy life of traveling and public speaking, Bryan relies on his Edge 3 Power Wheelchair with 4.5 mph iLevel® to maintain his independence.

“I feel like a whole new person with the independence and confidence iLevel gives me,” Bryan said. “I couldn’t imagine life without it.”

In addition to his all work with non-profit and service organizations, Bryan enjoys acting and has made many appearances in movies and television shows. Most recently, Bryan appeared in the Adam Sandler movie, “The Week Of.” He also published a biography on his life titled, “No Turning Back.”

Energetic and enthusiastic, Bryan likes to challenge himself. He enjoys rock climbing, snowboarding wakeboarding and white-water rafting. He loves to travel and meet new people.