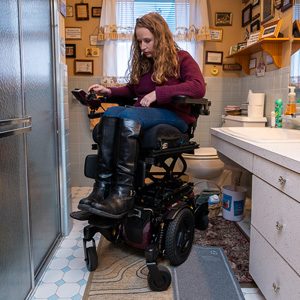 Born with spina bifida, Stephanie serves as a consumer advocate for Quantum Rehab and uses a Q6 Edge® 2.0 Power Wheelchair with iLevel® technology. With the elevated seating, Stephanie has greater independence at home. Before she got her iLevel, Stephanie hated cooking because she had difficulty reading the stove. Thanks to the elevation on her power wheelchair, she now enjoys cooking.

“Cooking is so much easier now that I can reach things,” Stephanie said. “I can't imagine my life without my iLevel.”

Her power wheelchair with iLevel also enables her to drive at walking speed so she can keep up with her nieces and nephew.

As the director for the Center for Disability Rights, Stephanie works hard to advocate for the disability community. She and her team host many events to promote inclusion. Stephanie is also an organizer for a grassroots organization called ADAPT, which fights for the rights of individuals with disabilities.

Stephanie has received a lot of recognition for her work in the disability community. In 2017, she received the David Veatch Advocacy Achievement Award from the New York Association on Independent Living. The award recognized her actions and leadership in helping to protect Medicaid and access to long-term services. Stephanie was also awarded the Silver Sweeper Award in 2017 by the Rochester mayor’s office. This award recognized her efforts in making Rochester a more accessible city for people with disabilities.

During her free time, Stephanie hangs out with her friends and family. She also enjoys spending time with her cats and dog.