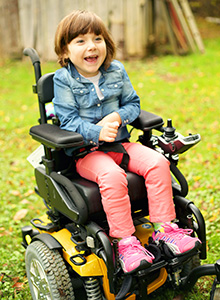 Corrie Whittington's five-year-old daughter Abigail puts all of her energy into being a child. Whether she's learning at school, playing with her friends or attending dance classes, everything that Abigail does serves one ultimate goal: having fun.

"For Abigail, being a kid is a full-time job," Corrie said. "But it's the kind of job she just loves to do."

Abigail, whose family lives just outside of Charleston, W.Va., has cerebral palsy. With her Q6 Edge® Power Chair from Quantum Rehab®, she is able to experience the full gamut of what childhood has to offer.

"Abigail wants to be independent, and the Q6 Edge lets her do that," Corrie said. "When her friends play together, she can play too, and when she dances, she can make sounds with her tap shoes on the chair's footrest." 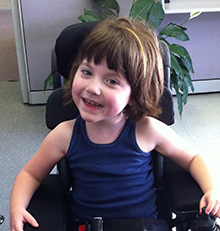 Prior to getting her Q6 Edge, Abigail had a manual wheelchair, which she started using at the age of two. At the time she outgrew it, Corrie hadn't considered power mobility as an option.

"When someone mentioned the idea of a power chair, we decided to go in that direction," Corrie said. "Before getting her Q6 Edge, though, Abigail used a different power chair, which was too bulky. The Edge is better at getting her into smaller spaces. She also likes the hand controls." 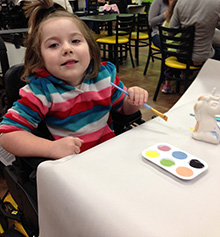 "That was her one stipulation," Corrie said. "The chair had to come in yellow. It's her favorite color."

When Abigail isn't playing merrily or dancing her heart out, she's attending school, which she enjoys just as much because it gives her a chance to be social.

"Abigail loves school," Corrie said. "She's made a lot of friends there. In fact, she's quite the socialite."

Abigail's family life is as rich as her social life. She has an older sister, Layla, who is seven, and her mom is one of eight siblings.

"We do all kinds of things as a family," Corrie said. "Specifically, we participate in a lot of functions at Abigail's grandmother's church."

Having a Q6 Edge allows Abigail to do all of these things and more.

"The power chair has totally changed her," Corrie said. "The independence she has gained has been life changing not only for her, but for us as well."