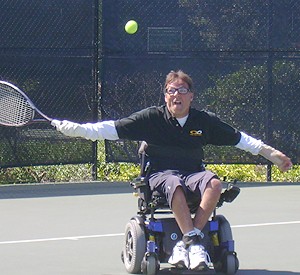 Adrian Dieleman is busy man, with a successful athletic career as one of the top ranked tennis players in the world and a rewarding part-time job as a chaplain at a rehab hospital. Both are endeavors that require dedication, commitment, and a clear sense of purpose, traits Adrian enjoys in abundance today, though he's the first to tell you that wasn't always the case.

In 1987, Adrian was drinking and driving when he lost control of his vehicle, crashed into a ditch, and sustained a spinal cord injury. He has used a wheelchair for mobility ever since. Now, he travels around his native Canada and beyond, speaking through an organization called SMARTRISK, trying to make his story serve as a warning to youth about alcohol abuse and the many dangers it can create, particularly behind the wheel.

Adrian is one of the top quad wheelchair players in the world, touring with the International Tennis Federation, and ranked among the top 20 singles players and the top 40 in doubles. The appeal of tennis, Adrian explained, is simple. "Tennis is a sport I can play with my able-bodied friends for recreation and fun, or at the US Open against competitors from around the world fighting for prize money and International rankings," said Adrian. "I travel to 15 tournaments a year and thoroughly enjoy travel, seeing new places." Adrian is on the national wheelchair tennis team for the second year in a row, and his goal is to represent Canada at the Paralympic Games in Beijing China in 2008.

But tennis isn't all Adrian is about. After his injury Adrian studied theology at McMaster University in Canada. Today he works part-time as a chaplain for Hamilton Health Sciences, often dealing with people who have recently suffered serious injuries, including Spinal Cord Injury. "Their lives have just been decimated," explained Adrian. "Talking with them about life in a chair and telling them about my own experiences wheeling down the beach or travelling to Beijing, often awakens in them a zest to not give up."

Adrian used a manual wheelchair for 20 years following his injury, but switched to a power chair in order to gain some extra speed and save wear and tear on his shoulders. He uses a Q6000Z from Quantum Rehab. "I picked the Quantum 6000 Z because of the 6-wheel stability, its mid-wheel drive allowing for quick turns, and its speed," explained Adrian. "My Z is used mostly for wheelchair tennis, where speed, stability and maneuverability are paramount." Plus, Adrian likes to enjoy himself off the court, "My Q6000z allows me to play hard but then also go out and see things without getting tired," he said. "For example, recently I was playing a tournament in Hilton Head Island, SC. After my match, my wife and I wheeled over the dunes and rolled 5 miles down the Atlantic Ocean beach while the surf was out. This was the first time I was ever able to do this and it was liberating! My disability allows me to push a manual chair on flat surfaces, but now, it seems the world has opened its doors and I can go just about anywhere."

Adrian knows that making the 2008 Paralympic Team will not be easy and will require plenty of hard work. But he's no stranger to hard work and with his Q6000Z he's more than ready for the challenge.