Anthony D'Amico - Keeping his eye on the goal 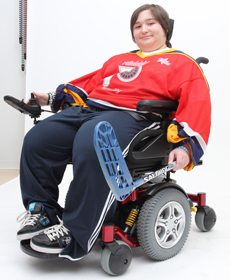 Anthony D'Amico doesn't let anything keep him down.

Anthony, son of Tony and Andrea D'Amico, was diagnosed with Duchenne muscular dystrophy at age six when he was in kindergarten. Only two years later when he was in the second-grade, Anthony began using a power chair full-time. Anthony attends the Muscular Dystrophy Association's summer camp each year, where he met his friend, Liam. It was Liam who first introduced Anthony to Philadelphia PowerPlay about four years ago.

"They've basically become my second family," Anthony said of his teammates. "They're always looking out for everyone who joins."

Philadelphia PowerPlay is a power wheelchair floor hockey team based in the Philadelphia metropolitan area. The team follows the rules and regulations of the United States Electric Wheelchair Hockey Association and is open to all persons who are competent power wheelchair users.

"The great thing is the players are very diverse," said Tony, who is also an assistant coach for the team. "The players are aged nine to 40, have different conditions and also have various ranges of motion abilities. Some players can use their hands. Those who can't have sticks mounted to their chairs. We mix up motion abilities on each team to keep things fair."

The very first full day that Anthony had his Q6000Z, which also happened to be his 14th birthday, he scored four goals. Anthony was recently selected to compete on the team this summer in the North American Power Chair Hockey Championships in Ottawa, Ontario.

"This new chair has given Anthony a lot of confidence," Tony said. "He used to be a lot more timid in the games. The response time on the chair is much quicker and it performs better. It's night and day from what he used to have."

In addition to playing power chair hockey, Anthony enjoys going to the movies and hanging out with his friends. He also likes Pokemon, playing video games, and watching professional ice hockey. Anthony's favorite team is the Pittsburgh Penguins and his favorite player is goalie Marc-Andre Fleury. Anthony hopes to one day meet Fleury.

Anthony has advice for anyone who is considering trying something new, but is hesitant. "Go for it," Anthony said. "You'll never know unless you try it. Power chair hockey gets me away from being in the house all day. It gives me something to do."