Desmeon Thomas - Leading by example in his Q6 Edge® 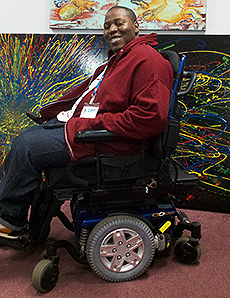 Desmeon Thomas went from being a follower to a leader.

As a young man, Desmeon was involved in a gang and was selling drugs and making bad decisions. At age 19, he suffered a gunshot wound which resulted in C6 quadriplegia, paralyzing him from the stomach down.

Desmeon, 29, of Jackson, Miss., relies on a power chair full time since sustaining his injury. He has always been in a Pride Mobility Products® or Quantum Rehab® power chair, starting off with a Jazzy® and then a Q6000Z. Recently, Thomas got a Q6 Edge® Power Chair.

When Desmeon was newly injured, he did not want to talk to people about what happened because he didn't think anyone could possibly relate. But that changed when a representative from Living Independence for Everyone (LIFE) of Mississippi, which advocates empowering people with significant disabilities, visited his hospital room. The organization educated Desmeon about his condition and how he can live independently.

Through LIFE, Desmeon learned about AmeriCorps, a program of the Corporation for National and Community Service, an independent federal agency whose mission is to improve lives, strengthen communities, and foster civic engagement through service and volunteering. Desmeon signed up for a two-year program in AmeriCorps where he was trained and served to transition people out of nursing homes and back into his community. Thanks to what he learned, Desmeon was able to transition himself from living at his mother's home to an apartment of his own. Desmeon also made new friends and started hanging out with a better crowd.

After his time in AmeriCorps was over, Desmeon attended a local community college for a while. Then one day in 2008, Desmeon got a call from LIFE offering him a full-time position as an assistant to the director.

After one year, Desmeon was promoted to an independent living and transition specialist, a role in which he remains. In his position, Desmeon works with children and their parents from birth through age 21 to make sure they get support services they need in the community. He also volunteers with organizations such as The Arc of Mississippi, the Mississippi Department of Rehabilitation Services, the Mississippi Paralysis Association, and others.

"I have to be a person that leads by example as an advocate in my job and the field I work in," Desmeon said. "That includes not only knowing what services are available, but having a superb power chair like the Q6 Edge. It wouldn't look good if I was talking to parents about how they can help their children if I was in a beaten-up power chair."

Desmeon says his Q6 Edge also helps him to lead an active social life outside of work. Desmeon is always going out places such as restaurants with his friends, and spending time outdoors.

"Just recently my uncle invited me to go hunting with him and I took my Q6 Edge," Desmeon said. "We had a great time. I was worried my power chair would be too loud in the woods, but it was not."

Desmeon offers a piece of advice for others with physical injuries: get motivated.

"A lot of people get hurt and never leave the house because they're not motivated enough to say they want the best for themselves," Desmeon said. "You've got to have drive and talk to people who are doing healthy, positive things."