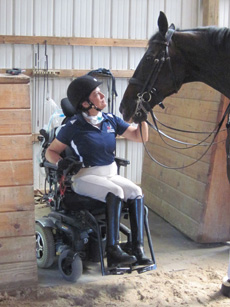 Because Donna uses a power chair and has a tracheostomy tube and ventilator, she had no idea how she could get onto a horse even though she desperately wanted to. In 2005, she explored the idea of therapeutic horseback riding, but was informed it was not possible with her ventilator. By 2007, Donna was able to go off her ventilator long enough to get onto a horse. Since Donna could not ride a jumper or hunter horse, she got involved with dressage, which entails training horses to perform certain movements at specific points and Donna describes as "ballet on horseback."

Now five years later, Donna, 50, of New Windsor, N.Y., was recently named to the 2012 U.S. Para-Equestrian Dressage Team and will compete in the Paralympics later this summer in London.

Donna uses her R-4000 power chair to help her train and care for her horses without the assistance of others.

"Because I'm so involved with the horses and I'm a very hands-on person, I don't want things done for me," Donna said. "I want to go and catch the horses, I want to be able to lead the horses, to brush and saddle them, and do the bridling. The power seat elevator allows me to get to the top of the horse. Because of the functions of the chair, I am totally independent with the horses. I feel that strengthens the bond I have with them."

Between being at the stables, walking her dog in the woods, and leading a very active life outdoors, Donna says she uses her R-4000 power chair hard. Yet, it can withstand everything she does.

"It's like the Energizer bunny," Donna said. "It handles different types of terrain and it just keeps going."

Donna's love for horses began when she was a child. She rode jumpers for fun on her local horseshow circuit for about 12 years. At age 19, Donna was diagnosed with multiple sclerosis (MS) but she continued to ride and even owned a horse at one time.

Donna says she put off getting a wheelchair at first even though she needed one, suffering needlessly before she got a manual chair and eventually a power chair.

"I was really stubborn because I thought the wheelchair would inhibit my mobility," Donna said. "I didn't realize how much better my life would be with it. I used braces and crutches and finally the continual falling and exhaustion convinced me to get a manual chair."

At age 28, Donna had her first magnetic resonance imaging (MRI) test which showed she actually has Devic's disease, or neuromyelitis optica, a rare autoimmune disorder that attacks the spinal cord and optic nerves. 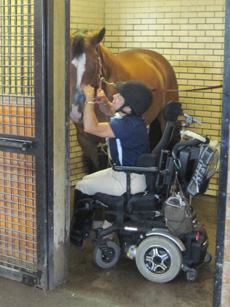 Having always been an athlete, Donna searched in the late 1980s for a new sport that she could play despite her disability. She took up wheelchair tennis since she did not think she could ride a horse. At one point, Donna was ranked the No. 2 wheelchair tennis player in the country.

After a few years of training in dressage, Donna decided she wanted to begin competing. She received a Grade 1a classification out of four grades that are used to classify riders according to their disability to keep competition fair. Donna's classification is considered the most disabled.

Donna first competed in dressage in March 2011 in California and she says did not perform well.

"I've come a long way in a year," Donna said. "I did horribly, but a lot of the judges were very diplomatic. That's when I found my current trainer, Wes Dunham, and he brought me up to the ranks."

In September of 2011, Donna competed in the Paralympic Nationals. She took the place of champion with Otto, a 16-year-old Dutch Warmblood, and reserve champion, or runner-up, with Western Rose, a 9-year-old Oldenburg.

Donna received invitations for Western Rose and Otto to selection trials for the Para-Equestrian Dressage Team. A third horse, PG Ganda, a 19-year-old Danish Warmblood, was grandfathered in as an alternate horse because of his experience. Donna borrows all of the horses she rides.

This past June 10-13, Donna competed in the 2012 United States Equestrian Foundation (USEF) National Para-Equestrian Championship in Gladstone, N.J. A few days later, Donna was notified that she earned the third of four slots on the 2012 U.S. Para-Equestrian Dressage Team.

"I never thought this would ever remotely be a possibility," Donna said. "To be doing this at this juncture of my life, it's incredible just to think I have such a shot at doing this. The United States has never medaled in a Para-Equestrian sport. My goal is to change that."