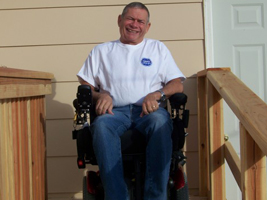 A 6-foot tall mother grizzly bear stood up in the road as Dwight Hodges approached her.

But the sound and appearance of Dwight's 2008 Harley Davidson Trike was enough to make her jump over a concrete retaining wall, leaving her two cubs behind.

"We've seen all kinds of animals," Dwight said. "You can't imagine the things you see from a bike versus a car."

Dwight, 59, of Billings, Montana, got his first motorcycle - a Sears Allstate scooter - at age 12. In 2004, Dwight was diagnosed with Charcot-Marie-Tooth disease Type 2 C, an extremely rare form of muscular dystrophy. Although his physical strength began to diminish, Dwight's passion for motorcycles did not.

In June of 2008, Dwight bought a trike so he could continue riding a motorcycle. He recently constructed a trailer to pull his Q600 power chair on the back of the trike. This allows Dwight to take his chair, which he recently had leg lifts and a tilt added to, everywhere. 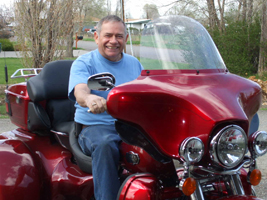 "Instantly I could see that was the way to go," Dwight said. "It was so much safer."

Dwight's wife, Mary, accompanies him on most rides. The couple has traveled on the trike to many destinations including Sturgis, South Dakota, the Bighorn Mountains, Beartooth Pass, Lolo Pass, and Yellowstone National Park.

"It's wonderful," Dwight said. "In the last two years I only missed riding it this last December because of too much snow."

"They don't care what kind of a bike you ride," Dwight said of the group. "It's the ride that's important." 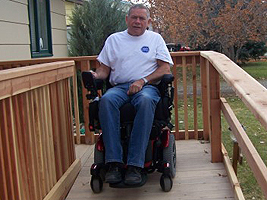 When Dwight is not riding his trike, he is likely at work at the U.S. Bureau of Mine Reclamation where he builds databases and maintains websites. However, Dwight didn't always work on computers. He previously worked as a farmer and rancher until he tore both of his rotator cuffs on his shoulders.

Having the desire to stay employed, Dwight inquired at a vocational-technical school about earning a computer degree. He enrolled at Montana State University in Billings where he earned a Bachelor of Science degree in information technology in just two years while maintaining a 3.91 grade point average.

Dwight also volunteers for the Muscular Dystrophy Association in which he participates in a local broadcast of the Jerry Lewis MDA Labor Day Telethon. He recently raised close to $1,000 in an MDA Lock-Up in which he was put in "jail" and asked people to "bail him out" to benefit the MDA.

In recognition of his service to the MDA, Dwight was selected as the 2010 Robert Ross MDA State Personal Achievement Award recipient for Montana. His hope is that a cure will be developed for the disease that has afflicted much of his family including his mother, grandmother, cousin, two daughters and grandchildren.

In the meantime, Dwight hopes to get as much out of life as possible on his trike. He strongly recommends a trike for other disabled individuals who are interested in owning a motorcycle.

"There are so many adjustments out there," Dwight said. "They do make air shifts and electric shifts. There are all kinds of options for whoever wants to ride."