Kiel Eigen - Lifting the Weight from His Shoulders 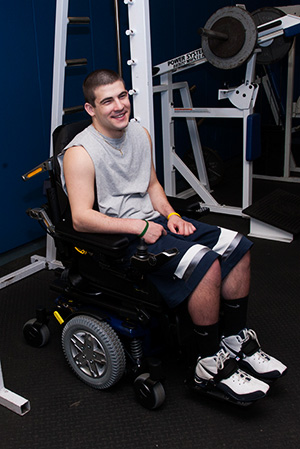 Kiel Eigen lives a very active life. If the 21-year-old Old Forge, Pa., native isn't attending his college classes, he's probably pumping iron at the gym or showing some team spirit at a local sporting event. For Kiel, life is all about experience.

"The world is full of opportunities," Kiel said. "It's a shame to pass up even the smallest ones, regardless of who you are."

At the age of 14, when he was in eighth grade, Kiel's life took an unexpected turn. While tackling another player during a school football game, he broke his C5 vertebrae and injured his spinal cord.

"It happened on the first play of the game," Kiel said. "It changed my life in the blink of an eye."

Today, Kiel is a criminal justice major at King's College in Wilkes-Barre, Pa., and he hopes to be a disability rights lawyer one day. Since his injury, Kiel has had to make some adjustments, but thanks to his Quantum Rehab® Q6 Edge® Power Chair, he doesn't miss out on life.

"I feel like I'm more active now than I ever was," Kiel said. "With my Edge, I can socialize more easily and enjoy the outdoors again. It's made the world much more accessible."

Previously, Kiel used a manual wheelchair, but since he could only use certain muscles in his hands, he became fatigued easily when operating it. With his Q6 Edge, fatigue is not an issue.

"I lift weights to stay in shape," Kiel said. "It helps with my injuries and makes daily living easier. Also, it's something I enjoy doing."

At home, Kiel has the support of a loving family. His parents, Kandi and Keith, and his older brother, Jared, 25, are always willing to help him with anything he needs.

"When I was injured, my mom took a year off from work to take care of me," Kiel said. "My family also worked hard to install a wheelchair ramp at our house. They've been so wonderful, and if I thanked them a million times, it still wouldn't be enough."

Between his various engagements, Kiel attends regular physical therapy sessions at Allied Services in Scranton, Pa. Now, thanks to his hard work, he is able to walk very short distances with braces and a walker. When he was a senior at Old Forge High School, he demonstrated that feat in front of a large audience.

"I did it before a school basketball game," Kiel said. "The gym was packed, and it felt amazing to have everyone cheering me on and encouraging me."

What's next for Kiel, then?

"I'm just going to keep doing what I do," Kiel said. "I'll be focusing on family, friends, weights and everything in between."