Luke Harris - Warding Off Bad Guys in His Q6® Edge 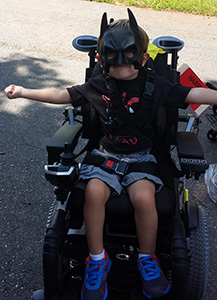 From warding off monsters under his bed to fighting crime on the playground, three-year-old Luke Harris uses his "Batmobile" to be the best superhero he can be.

With Batman as his biggest role model, Luke, of Hickory, N.C., needed a power chair that could help channel his inner superhero. Because he has spinal muscular atrophy, he uses a Q6 Edge® Power Chair from Quantum Rehab® that is all black and decorated to resemble the famous "Batmobile." He even attaches a cape to the back of his Q6 Edge. 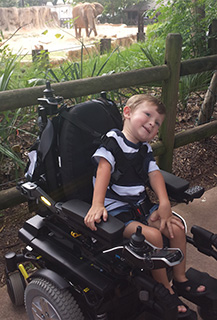 "He is very passionate about Batman," Kelly Harris, Luke's mother, said. "This chair allows him to participate with his friends at recess. It gives him support to keep up on the playground.

"Luke's Q6 Edge has allowed him to be more mobile, which has given him a chance to show his personality and become more independent," Kelly said. "He is able to maneuver his chair and handle the technology, giving him the ability to do what he wants to do."

Before Luke got his power chair, he was unable to participate at recess with his friends. Now he can keep up with others as well as continue to learn how to take care of himself.

"It was hard for Luke to reach certain things in the past - now he can lift up his chair to wash his hands or get an item on the counter," said Kelly. "It's wonderful to see him gaining a bit of freedom."

Being a superhero is sometimes hard work, though - which is why the support of Luke's family and friends has been very beneficial to him. Aside from his mom, his dad, Robert, helps him play and grow. His nine-year-old sister, Kamryn, is also helpful towards her brother's needs.

Kelly says the community has been supportive by hosting fundraisers to help them with medical costs.

"Luke is very excited to start preschool," said Kelly. "Now that he has his power chair, he will be able to interact more with the other kids. The different speeds will help him keep up with others."