Stephanie Woodward - Pursuing Justice for All 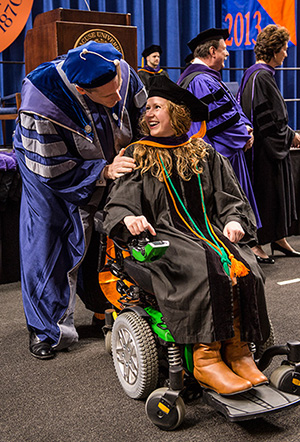 Stephanie, who has spina bifida, originally used a Quantum Rehab® Q600 Power Chair. She now has a new Quantum® Q6 Edge® Power Chair and says she loves the power chair and how fast it goes.

"I get a lot of compliments on my Edge," Stephanie said. "I like the seat and the way the chair rolls around my apartment so nicely and throughout Miami. It can take me to work. I have the LED lighting package which is very helpful. I didn't know I would use them nearly as much as I do. I also think my Edge takes bumps a lot better and more smoothly. This chair can take a small step up with ease."

Stephanie says her areas of focus in her education and career are no coincidence. In her new job, Stephanie works on disability rights cases ranging from basic access issues such as restaurant inaccessibility to removing disabled people from institutions.

"There is nothing more fulfilling than fighting to ensure people with disabilities are treated equally," Stephanie said. "I show others that we not only have the same rights as everyone else, but that we can be pretty spectacular, too." 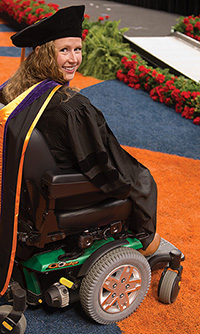 Although she only recently graduated from law school, Stephanie is not new to disability law. While an undergraduate at St. John Fisher College in Rochester, N.Y., Stephanie was a transportation advocate part-time for the Center for Disability Rights in Rochester. She also worked on the disability council of Sen. Tom Harkin, who authored the bill that created the American Disabilities Act, and completed an internship at Empire Justice, a non-profit legal organization in Rochester that helps people with disabilities get the proper legal services they need.

"I got to learn a lot about the law," Stephanie said. "I worked mainly on access cases where places were inaccessible or roads were improved but the sidewalks were not. My favorite and most exciting cases pertained to doctors and hospitals who refused to give interpreters to individuals who are deaf. I think a lot of people just don't understand access and they need to learn. It is not courtesy, but a person's right."

Stephanie says her Q6 Edge helps her to fulfill her busy schedule from the courtroom to a night out with friends.

"I don't know what I would do without my Edge," Stephanie said. "It has allowed me to move across the country and remain completely independent. I know that no matter where I need to go or what I want to do, my Edge will take me there."