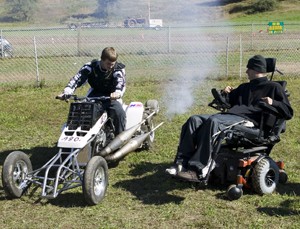 Nothing could come more naturally to Terry Stone than his role as the crew chief for a team on a national All-Terrain Vehicle racing circuit. "I've always been mechanically inclined," said Terry. "When we were kids, my brother was into football and played other sports and I was always working on cars." The fact that his brother, Nate, is the driver of the team, just makes it that much more fun.

The brothers got introduced to ATV racing by chance several years ago, when a friend of their family who was involved with snowmobile racing, introduced them to the New York ATV Drag Racing Association. "We had an old four-wheeler sitting around the garage, and our dad's fried told us to fix it up and bring it up to race," recalled Terry. They did exactly that, and the brothers have been dedicated to the sport ever since.

Now, with Nate driving and Terry in charge of maintenance, the Stone's are a force to be reckoned with on the circuit, consistently winning races in the Super Pro Modified Class, competing on a track near their home in rural Montrose, PA. Terry uses a Q6000Z Power Chair for mobility, due to injuries sustained in an automobile accident more than 10 years ago. "I was testing out a car I had been working on," Terry remembered. "A part failed, plus I was going too fast, and I ended up upside down off the side of the road."

He credits his Z with allowing him to fully immerse himself in the racing experience. "Race day is very competitive," said Terry. "If the bike isn't working exactly right, it gets very quiet. Nate and I just focus and we might go back and forth at each other a little." With that level of intensity, he has little time for problems with his mobility. "In 10 years, I've used a few different wheelchairs, and my Z is the best by far," he said. "I can get anywhere I need around the track, fast, and without worrying about getting stuck. That's important to me."

The third member of the team is Terry's caregiver, Dave Rider, who grew up as friend of Terry's brother. "The attendant I had before moved on, and I was looking for someone else when Dave said he thought he could do it," said Terry. "It was the best decision I ever made. I'm in much better physical condition than I was before Dave came along." Working together, the three have a system for keeping the ATV in top racing condition. "I tell them what parts to change and what to adjust by listening to what's happening on the track," explained Terry. "I can tell what's going on with the bike by listening to it and getting some feedback from Nate." Getting it right is important because Terry, Nate, and Dave run a limited schedule compared to many of their competitors. "Some teams travel all over the region, but we're not in a position to do that, so to stay competitive in the points standings, we need to win the races we enter," Terry explained. "We have to maximize our time, and right now we're winning our share and staying near the top.