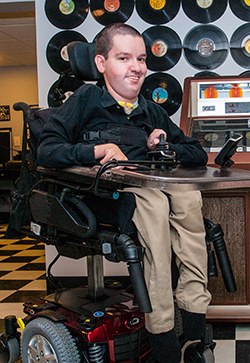 If there's one thing Tim Gaynord enjoys more than hanging out in his retro-themed recreation room, it's modern technology. Unlike most people, however, he uses technology for more than his own amusement.

Tim, a 32-year-old native of Scranton, Pa., has Duchenne muscular dystrophy. He uses a Q6 Edge® Power Chair from Quantum Rehab to get from place to place and says it has done wonders for his mobility.

"The Q6 Edge allows me to not only enter my basement on my own, but also move around freely once I am there," Tim said. "It's especially good in tight spaces."

Tim says he prefers the Edge's mid-wheel drive to his old chair's rear-wheel drive. More than anything, however, he loves the independence that comes with it.

"The chair's lift and electronics allow me to interact with my environment more easily," Tim said. "It also makes it easier to get in and out of the car."

Tim's Edge is equipped with environmental controls that allow him to operate various devices around him, such as computers, light switches, and his television.

"I spend most of my day using my computer or watching TV," Tim said. "With the environmental controls, I can do both of these things and more without assistance. They eliminate the need for multiple devices and allow me to operate everything through the chair's Q-Logic controller."

Tim and his mother, Lisa, recently had a chance to visit the Quantum facility and see what goes into the construction of each power chair.

"We got to see all the testing that each chair goes through," Tim said. "You never realize how much goes into it until you actually see it. Usually, I'm a try-first, worry-later type of guy, but it helps to know these things in advance."

In addition to catching up on his favorite shows, which include "24" and "Game of Thrones," Tim enjoys playing poker at the casino and watching football. His favorite college team is Notre Dame, and his favorite professional team is the New York Giants.

Tim holds an online degree in accounting from Colorado Community College, and he is currently interviewing for jobs that will allow him to work from home. He lives with his mother and his father, Tom, in the West Mountain section of Scranton.

"My family has always been there to support me," Tim said. "It goes without saying that I wouldn't be where I am without them."

Tim is also involved with the Citizens Advocacy Committee, which addresses organizations that help people with disabilities and gives them feedback on how they can improve their services.

"As a representative for the disabled community, I feel it's important to let these organizations know how they can best serve their clients," Tim said. "That way, I'm not only living my life to the fullest, but helping others do so as well."