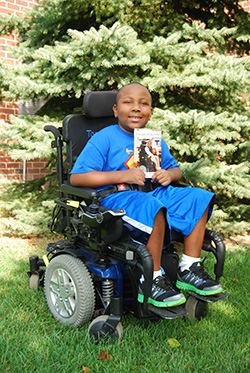 Not many nine-year-olds can say they are published authors, but Torrance Johnson is one of the few exceptions. The Detroit native, who lives with his family in Canton, Mich., has Type 2 spinal muscular atrophy (SMA). He wrote his book, "Torrance Hates SMA," with his mother, Katrina Johnson, in hopes of helping others with SMA live fulfilling lives.

"Torrance is thrilled to be a published writer," Katrina said. "He's gotten some attention as a result, but for him, the most important thing is reaching other children who have SMA and letting them know they're not alone."

Torrance uses a Q6 Edge® Power Chair from Quantum Rehab® to help with his mobility. According to Katrina, the Edge is much better than other power chairs he has used in the past.

"We were always experiencing issues with the chair Torrance had before the Q6 Edge," Katrina said. "The Edge is more reliable and much easier to use. He also likes the metallic blue color and the fact that his name is on the seat."

The Edge is easier for Torrance to use because it is more compact than his previous power chair. Its smaller size allows him to get into tighter spaces more easily, Katrina says.

"Torrance does a lot of public speaking, so we do plenty of traveling," Katrina says. "He visits churches and various organizations to speak about his condition. The Edge makes it much easier for him to do so."

Torrance was selected to be the Muscular Dystrophy Association's (MDA) State Goodwill Ambassador for Michigan. As an ambassador, he visits various locations throughout the state to raise disability awareness and spread his message of positivity. He also attends MDA summer camp each year.

Torrance tries to make as many public appearances as possible because he not only wants to educate people on SMA but also show them what people with different abilities can do.

Torrance is in the third grade, and his favorite subjects in school are math and science. In his spare time, he enjoys a number of activities, including horseback riding and going to the beach.

In 2012, Torrance's doctors helped him draft a letter to the Make-A-Wish® Foundation. His wish, which was to meet First Lady Michelle Obama, was granted that year.

"When Torrance met Michelle Obama, he told her all about himself," Katrina said. "He also told her he wanted to make an exercise video for kids and adults who use wheelchairs."

Torrance's dream is to one day be President of the United States.

"Torrance hopes people can look to him for inspiration," Katrina said. "He's a living example of how much you can accomplish, no matter how old you are or what challenges you might face."