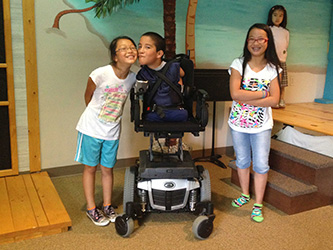 When Zeke Holmes was a baby, his mother always kept a close eye on him. One day, however, in an instant, he found his way under a bed in a hotel room where the family had been staying. Frantic and not sure where he had gone, his mother searched every corner, never believing he would be under the bed. When she finally looked there, she found her son smiling at her.

Nowadays, nine-year-old Zeke, who was born without limbs, is smiling more than ever.

"Zeke has a great attitude," said Greg, Zeke's father. "He doesn't let barriers get him down, and he's willing to try and find ways to do just about anything possible."

Zeke uses a Q6 Edge® Power Chair with TRU-Balance® 3 Power Positioning Systems and 10" Power Lift from Quantum Rehab® to help with his mobility. He operates the joystick using a residual limb.

Among other things, the chair allows Zeke to get around summer day camp quickly and play with his friends more easily. The 10" Power Lift also facilitates daily activities.

"Zeke likes the chair's lift function because it allows him to sit at tables and desks at the right height," Greg said. "I also like the lift because it is easier for me to get him in and out of the chair when necessary."

In addition to the Edge's operational capabilities, Zeke likes the look of his chair, which has Silver shrouds. Greg says that it is also faster and less cumbersome than his previous chair.

When asked what he wants to be when he grows up, Zeke has a number of answers, including a truck driver, a police officer, and a mechanic. Like any child, however, he's keeping his options open.

"He does have an interest in cars," Greg said. "Matchbox® cars are his favorite toys. He will draw roads on pieces of paper and then use the papers and cars to set up little cities."

In addition to his toy cars, Zeke likes looking at sports cars in magazines or on TV, and he gets even more excited when he sees them in real life.

While Zeke dedicates much of his time to his car hobby, his family is even more important to him. He has three sisters: Jasmine, 13, Anna, 12, and Grace, 10.

"Like any brother, Zeke loves to tease his sisters," Greg said. "But it all comes from a place of love."

Thanks to the lift function on his Edge, Zeke has no problem showing his love for his sisters. In Quantum's latest My Edge ad, he is shown giving his sister Grace a kiss on the cheek.

According to Greg, Zeke has a zest for life that is not typical of most children his age, and nothing seems to slow him down.

"Zeke has faced his share of challenges, but he is a living ambassador of what is possible," Greg said. "We hope others can learn from his example and live their lives as fully as he has."