TRU Balance® 4 Power Positioning Systems with Anterior Tilt, available on the Stretto, 4Front® 2 and Edge® 3 Power Chairs, is a seating system designed to promote a change in position, enhance functional activities, facilitate physiological functioning and improve a consumer’s visual field. Read on to learn more about the major benefits of anterior tilt on Quantum Rehab® Wheelchairs.

What is Anterior Tilt? 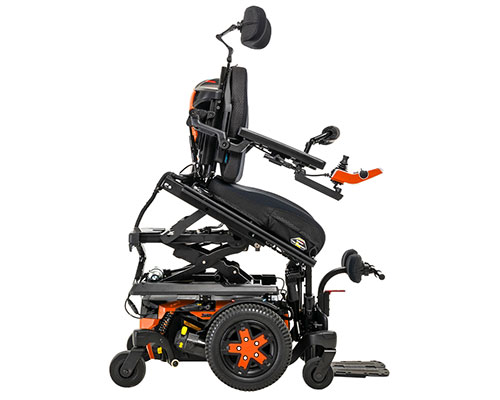 Anterior tilt is a power seating function that changes the angle of the power wheelchair seat, so the rear aspect of the seat is higher than the front. This facilitates an anterior pelvic position, placing the consumer in a partial weightbearing stance. There are many benefits to anterior tilt in terms of functionality, as well as other benefits.

The Functional Benefits of Anterior Tilt on Quantum Rehab Wheelchairs

iLevel® power adjustable seat height combined with anterior tilt provides consumers with optimal access. With a forward tilt of a user’s seating system, ranging from 10, 20 and 30 degrees, consumers may find it easier to perform mobility related activities of daily living, such as:

In addition, consumers may enjoy improved upper extremity function and increased access under and over tables and other surfaces. Anterior tilt may also help with the management of tone and reflexes.

The Psychological Benefits of Anterior Tilt on Power Wheelchairs

Anterior tilt may offer many psychological benefits, such as giving the consumer confidence. A neutral to anterior pelvic tilt position facilitates spinal alignment, which allows the head to sit naturally on the cervical spine. This minimizes the amount of energy a consumer expends trying to maintain a horizontal eye gaze, which may promote social interaction. Maintaining an upright posture when seated may promote a positive mood and help build resilience to stress, maintaining self-esteem. Switching between seated and standing positions may also increase the release of hormones like serotonin, which is a mood booster.